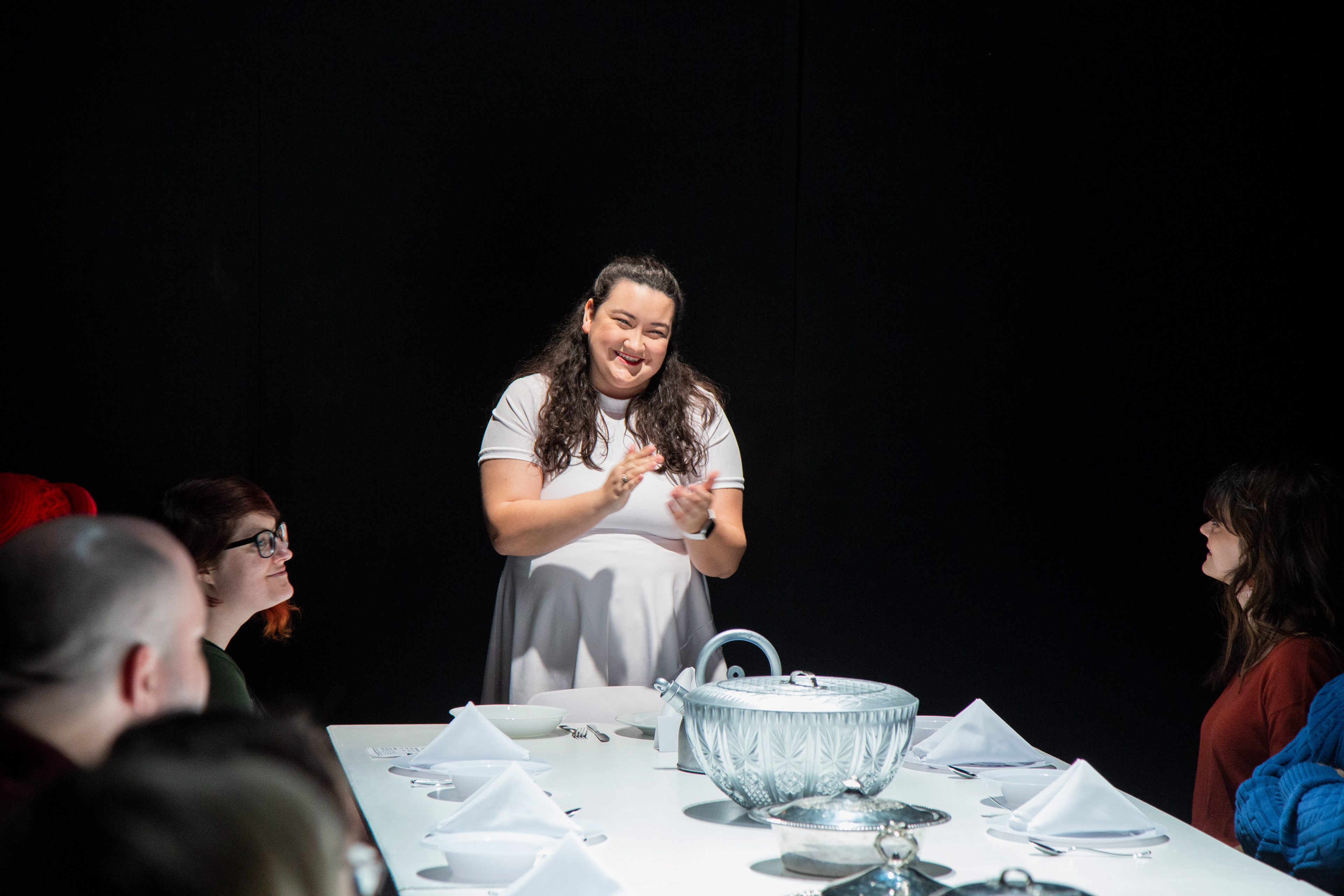 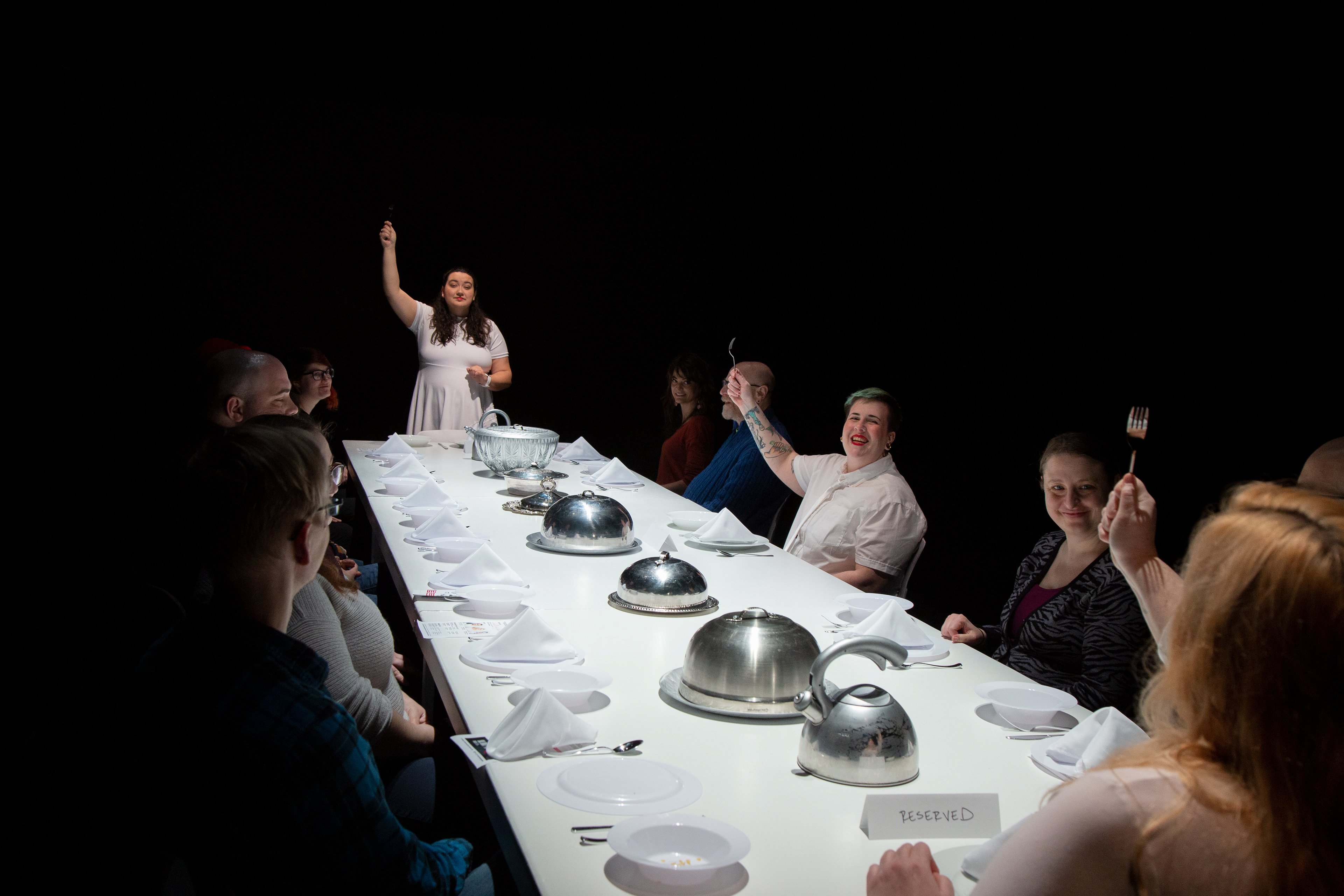 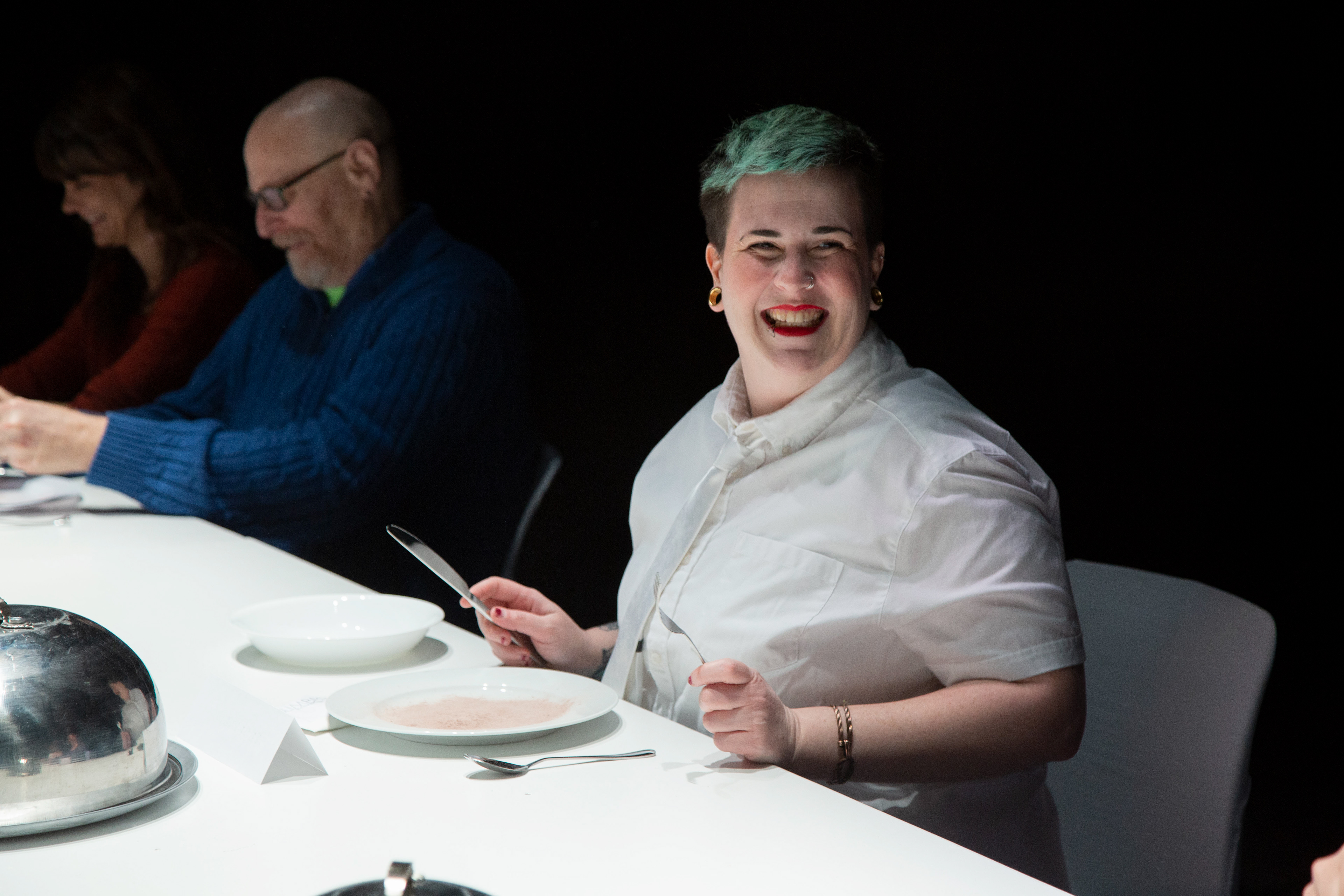 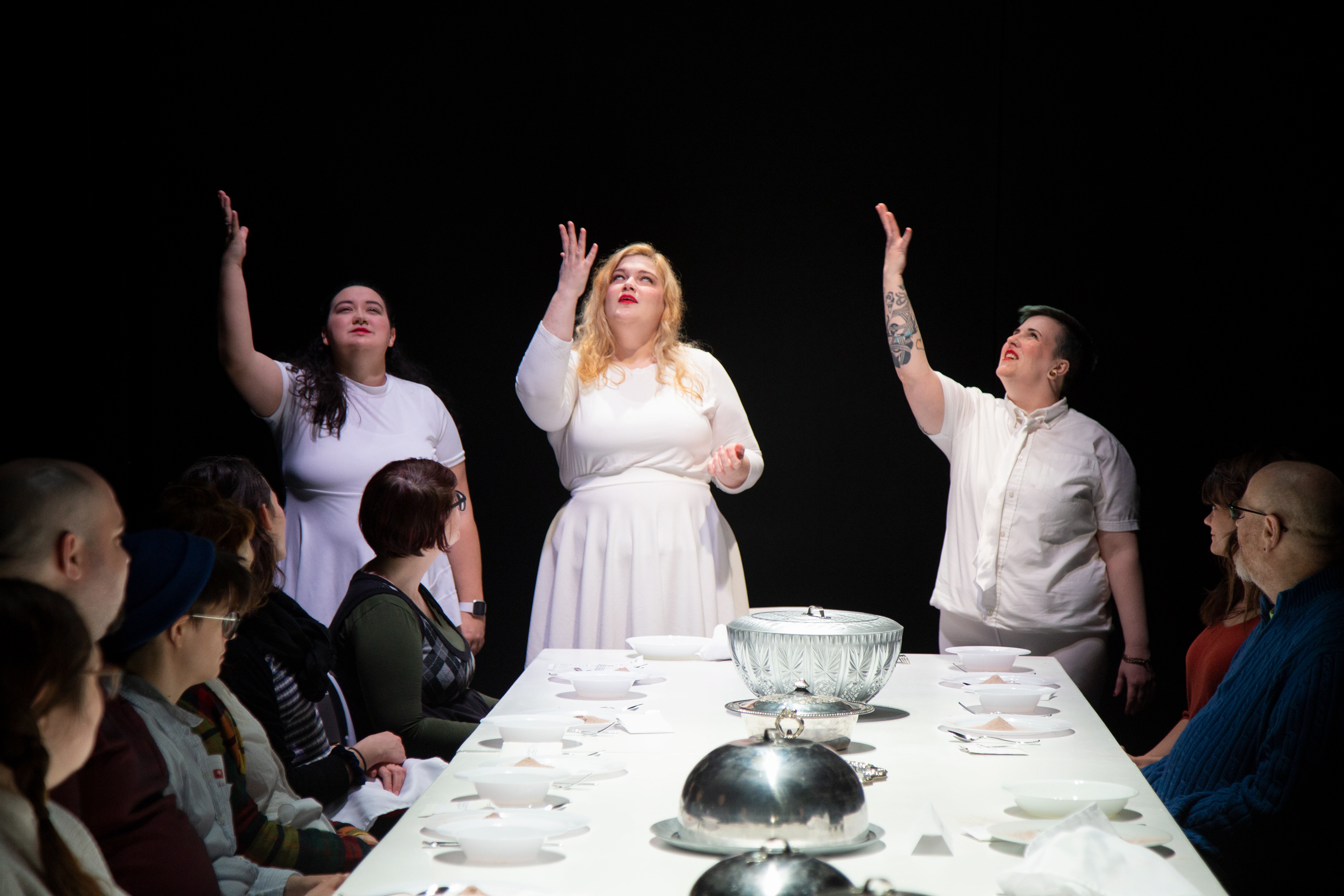 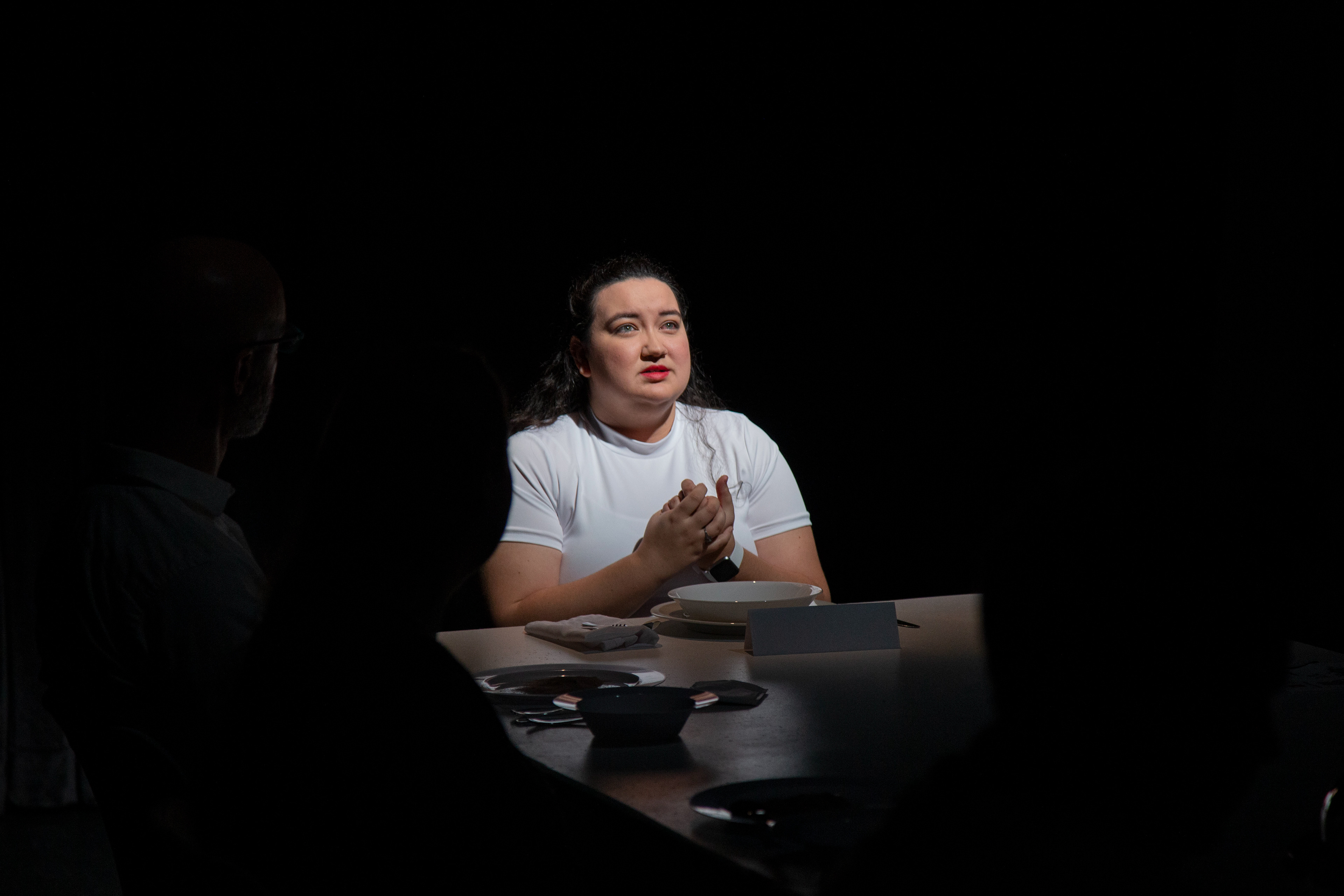 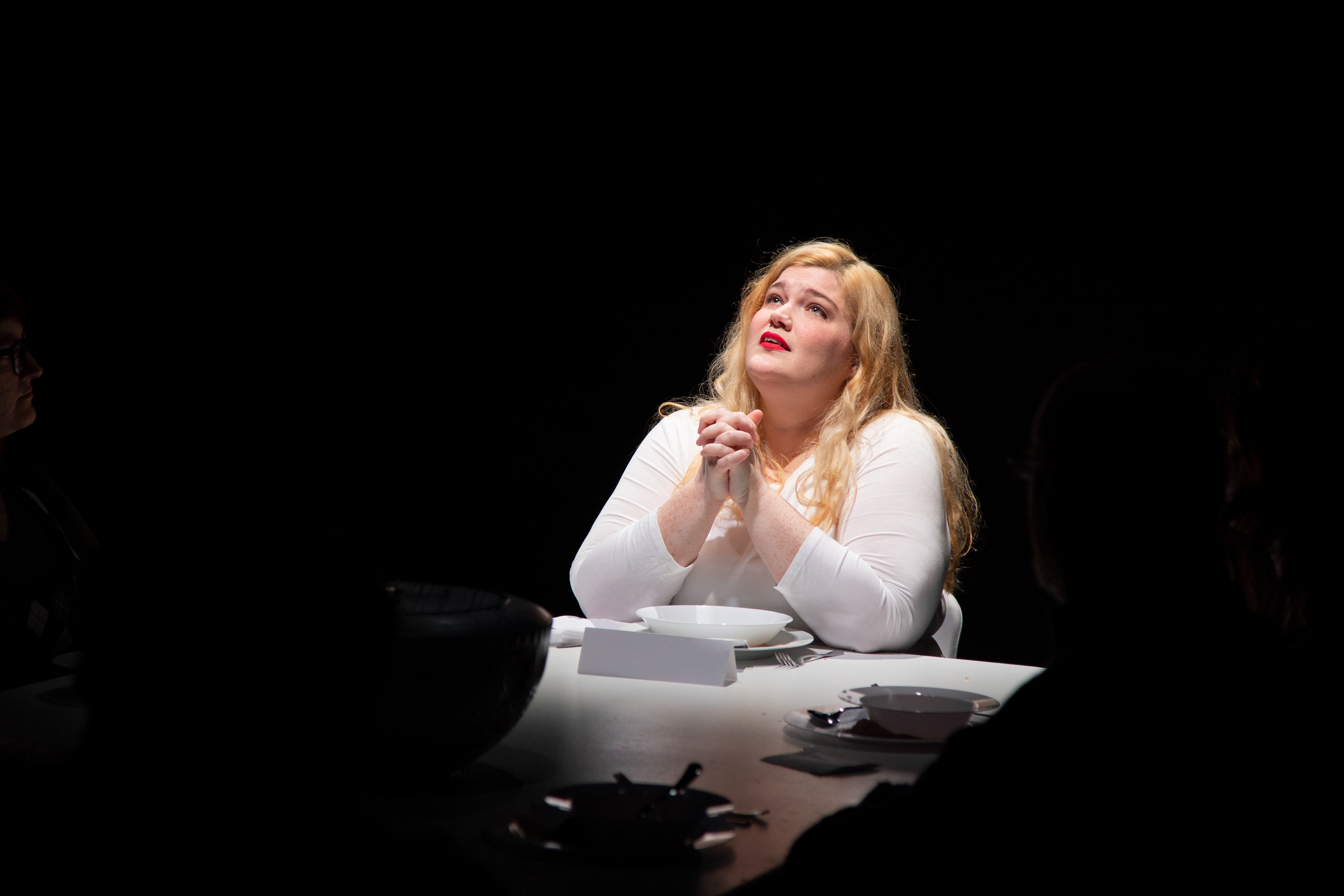 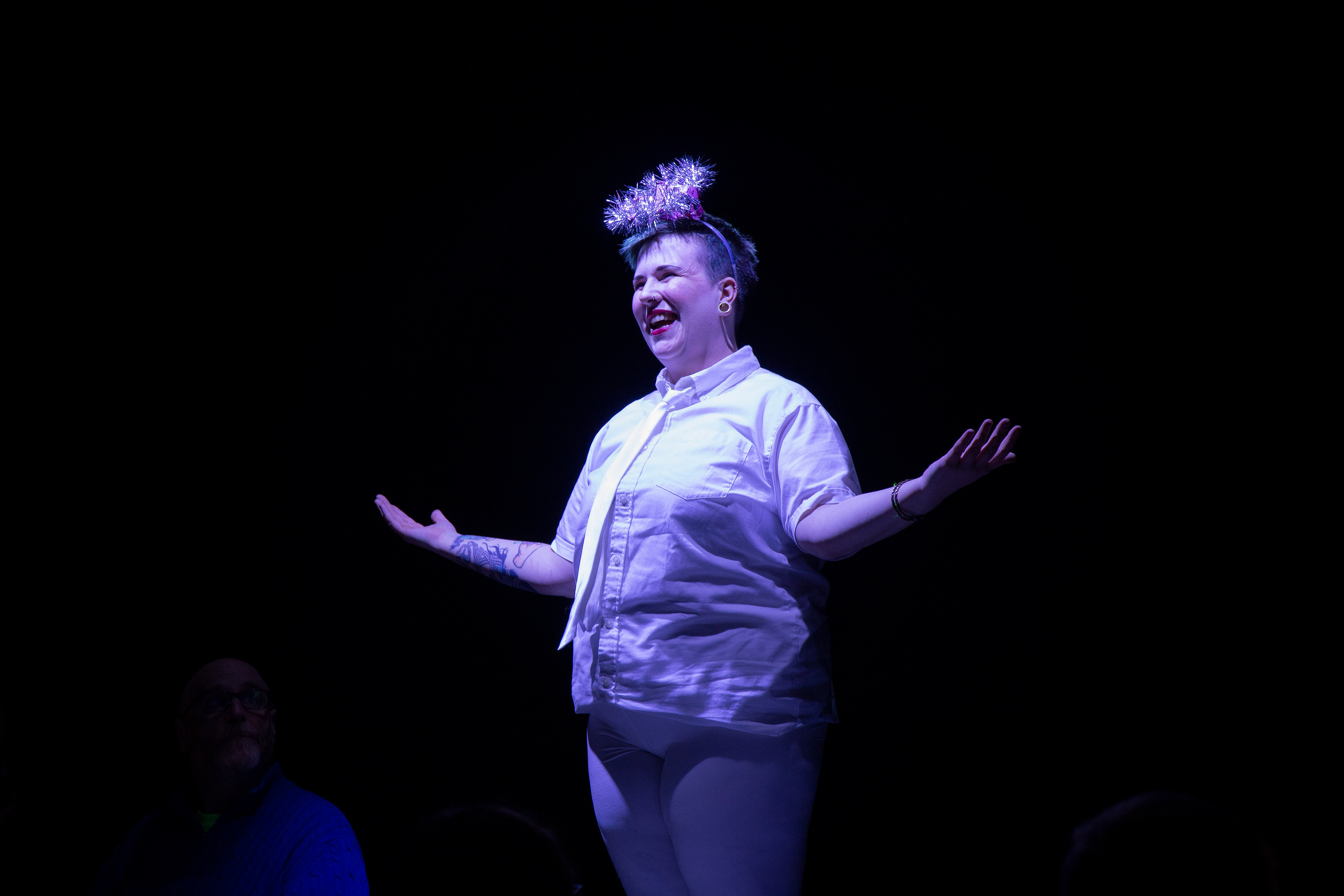 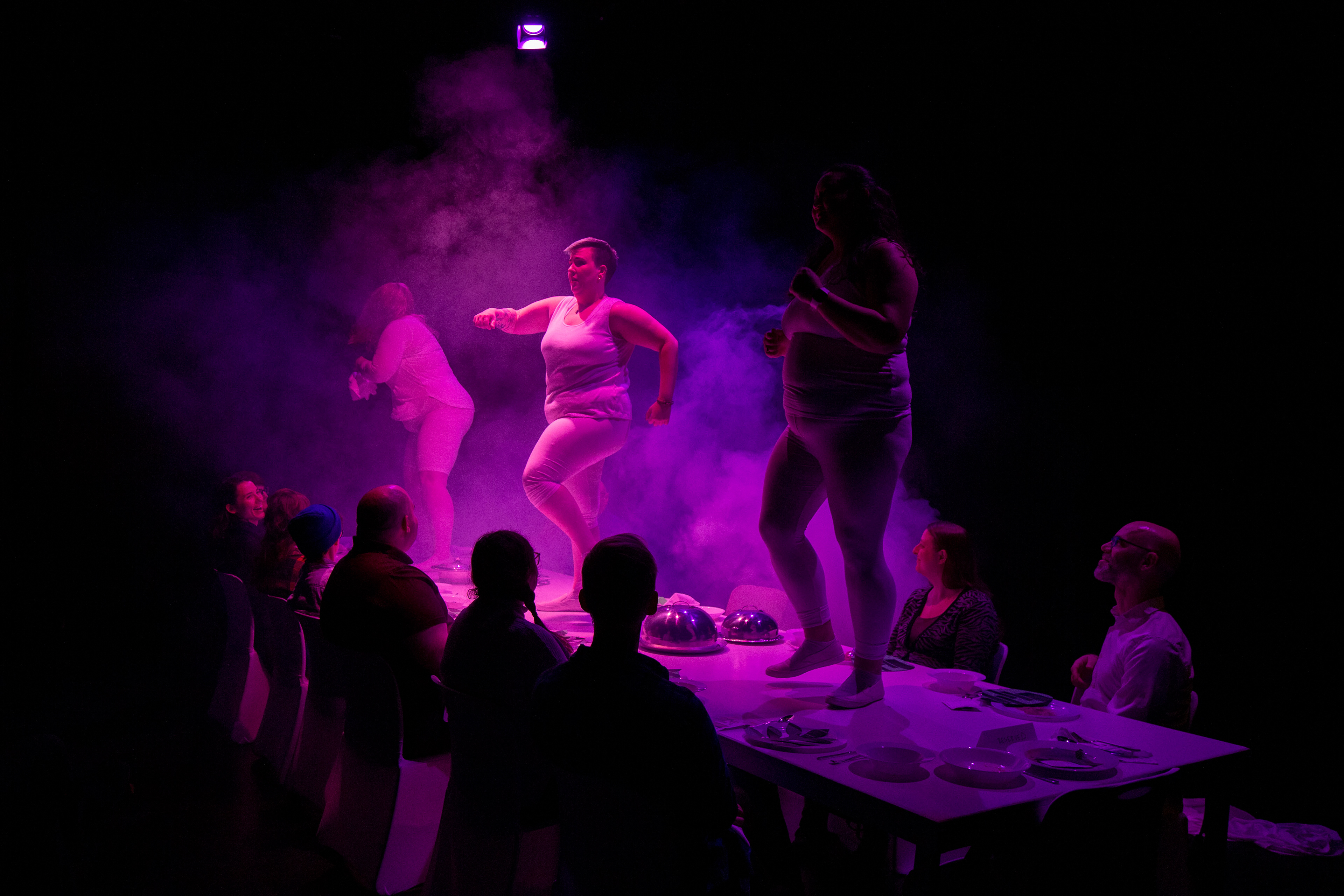 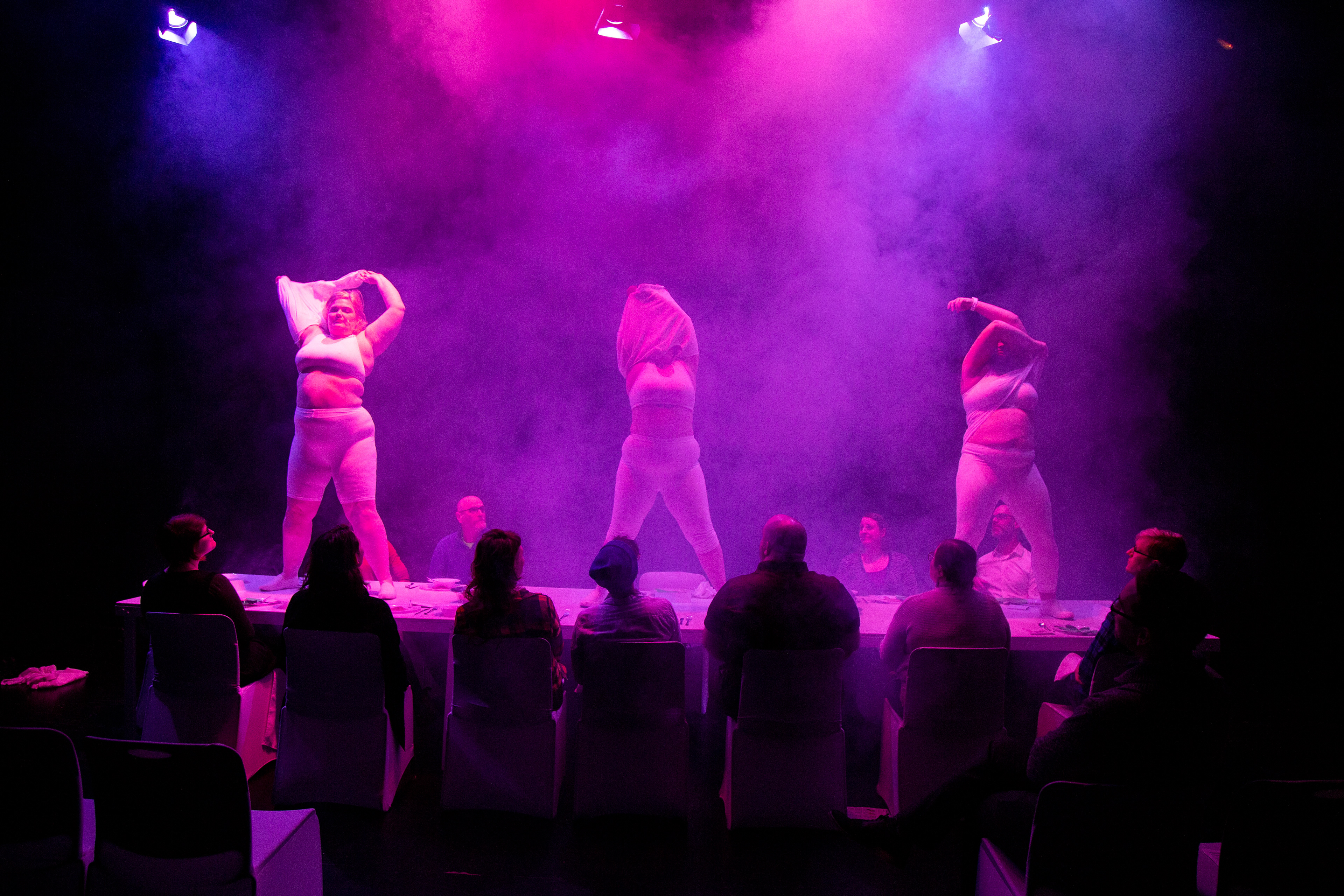 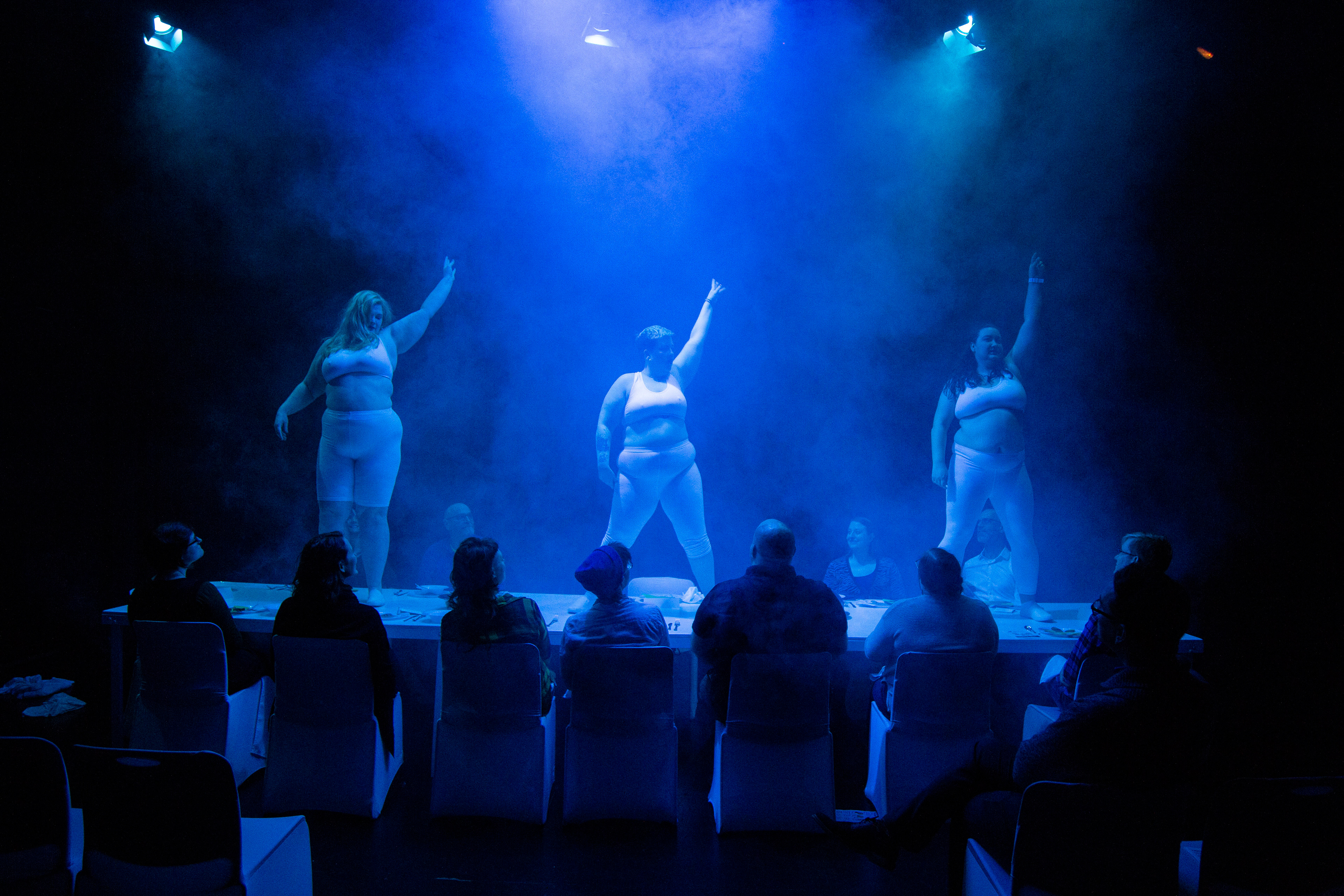 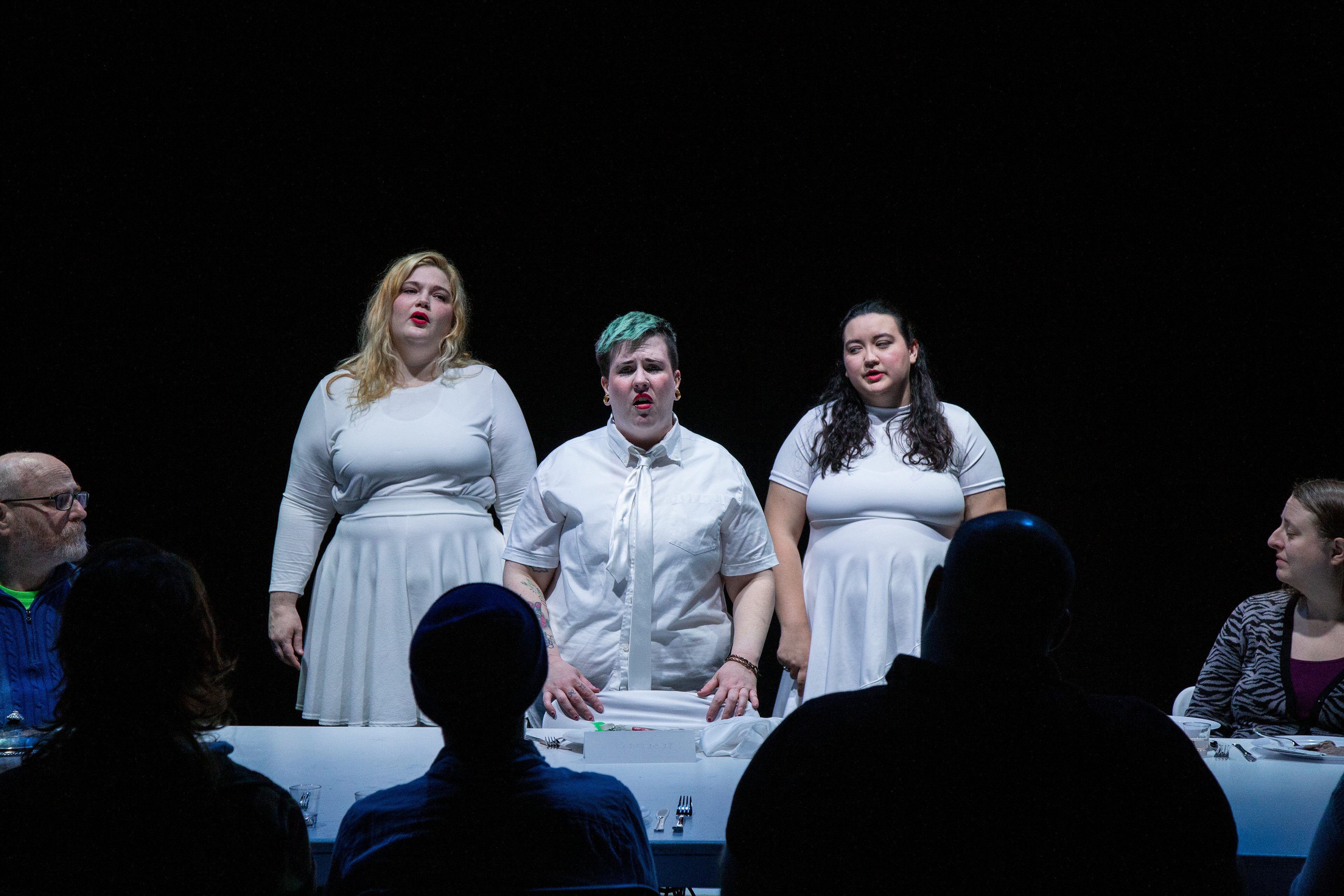 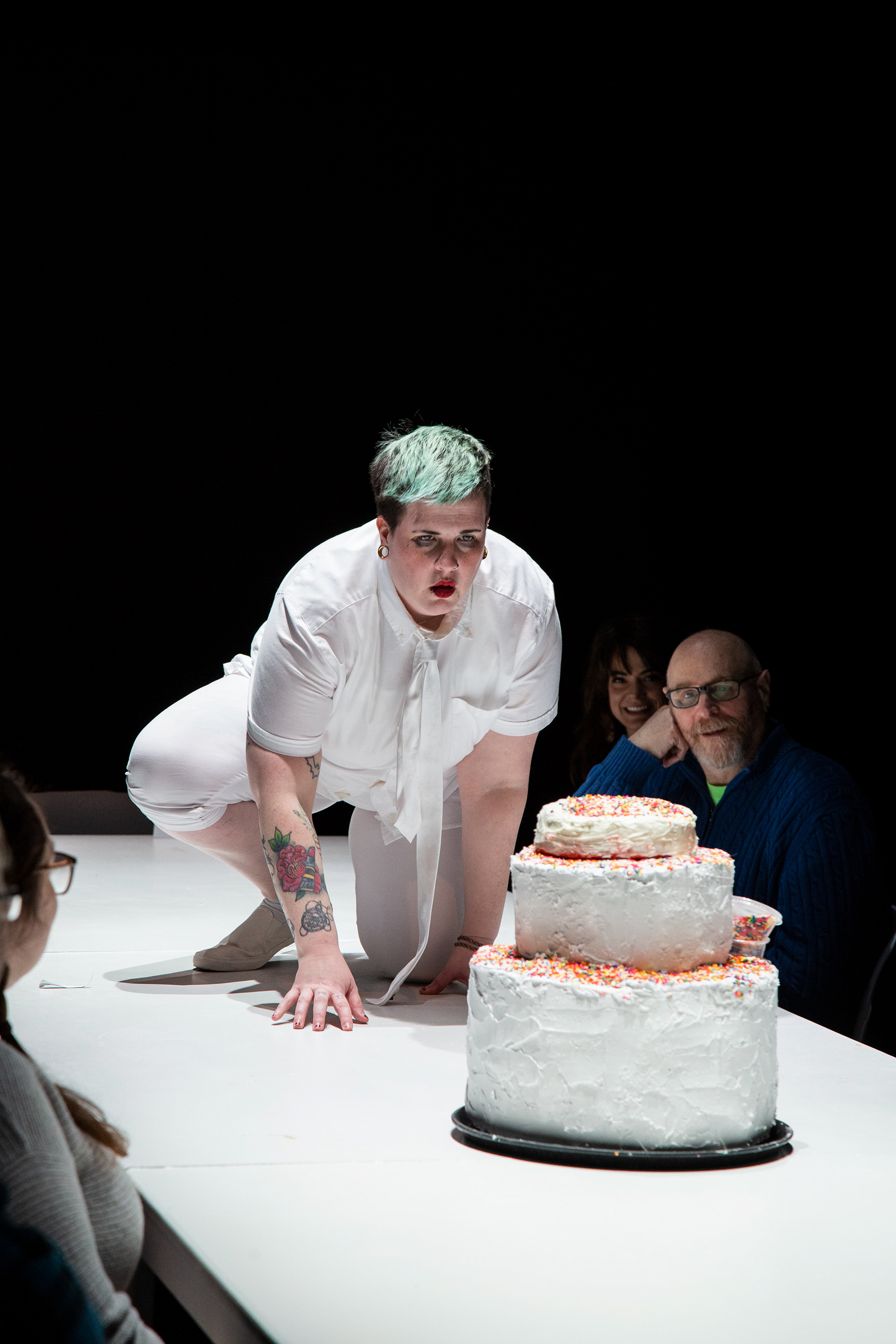 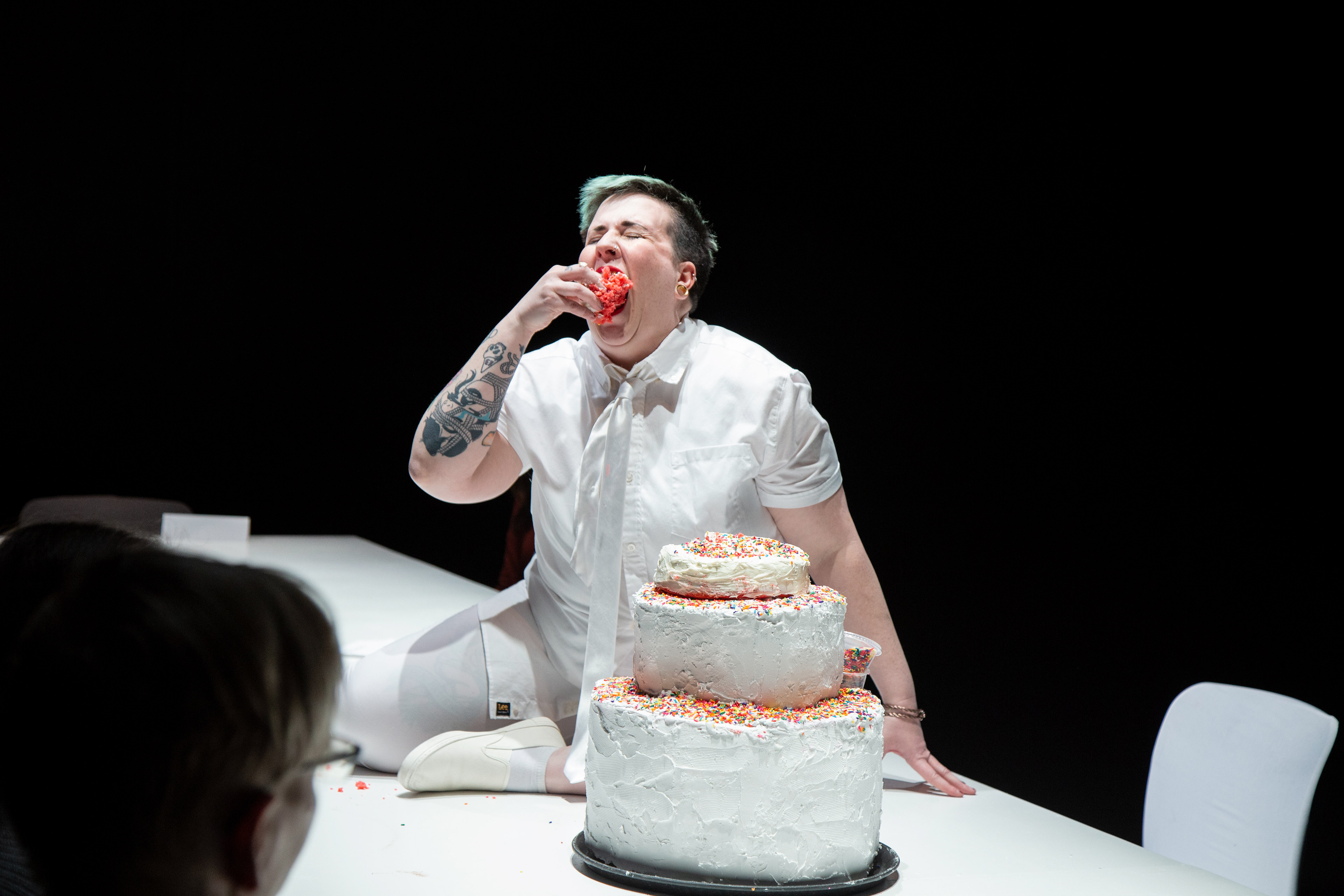 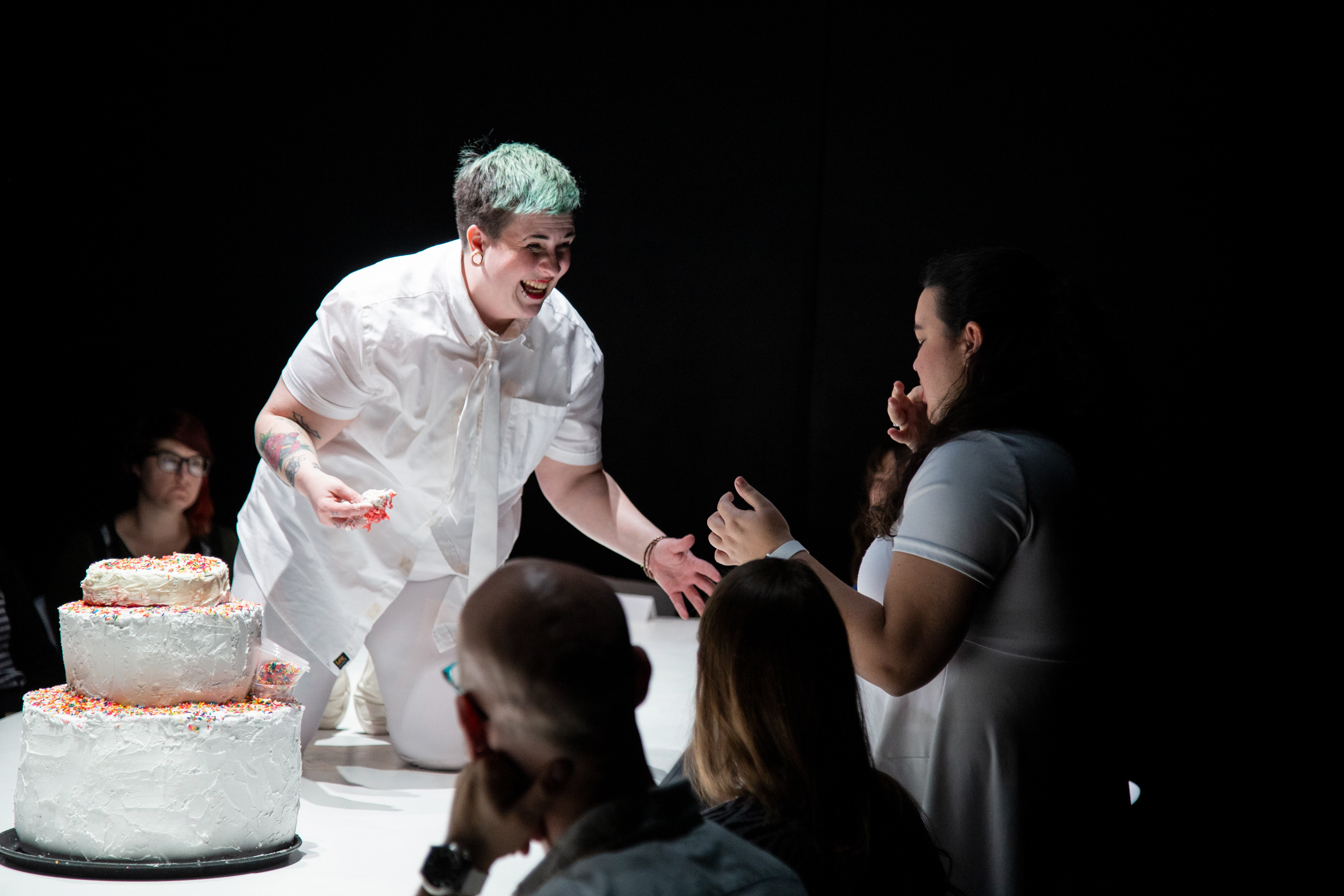 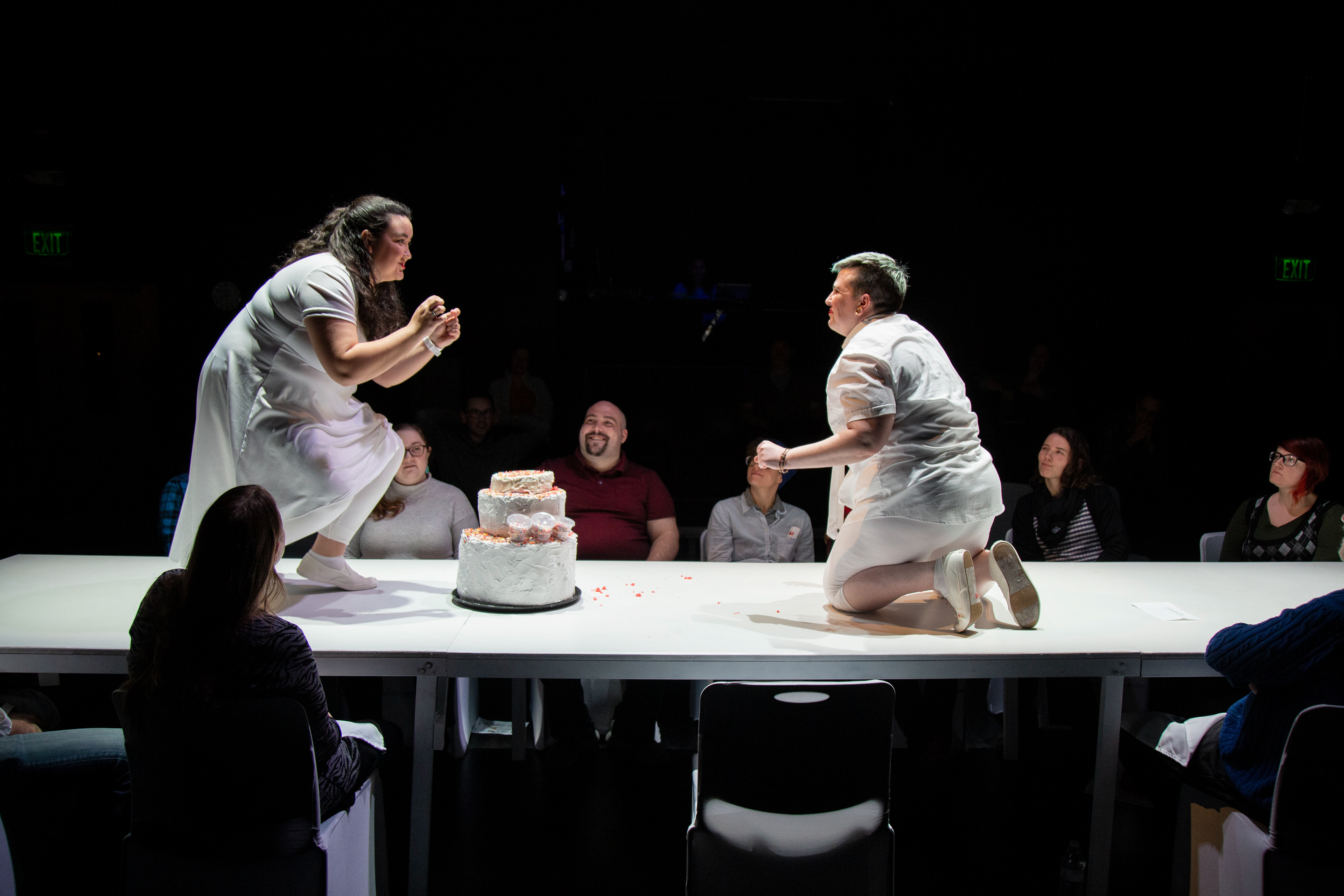 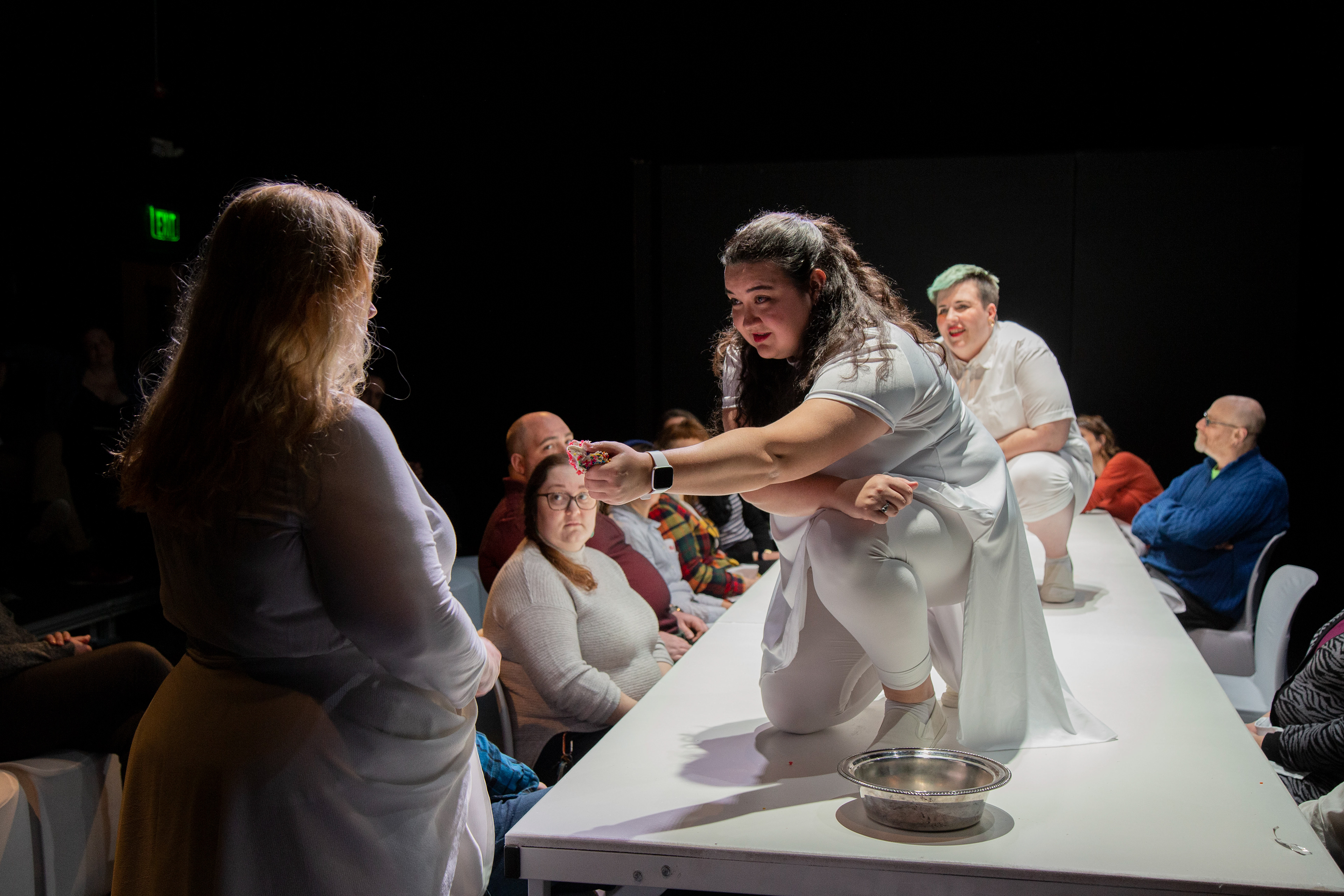 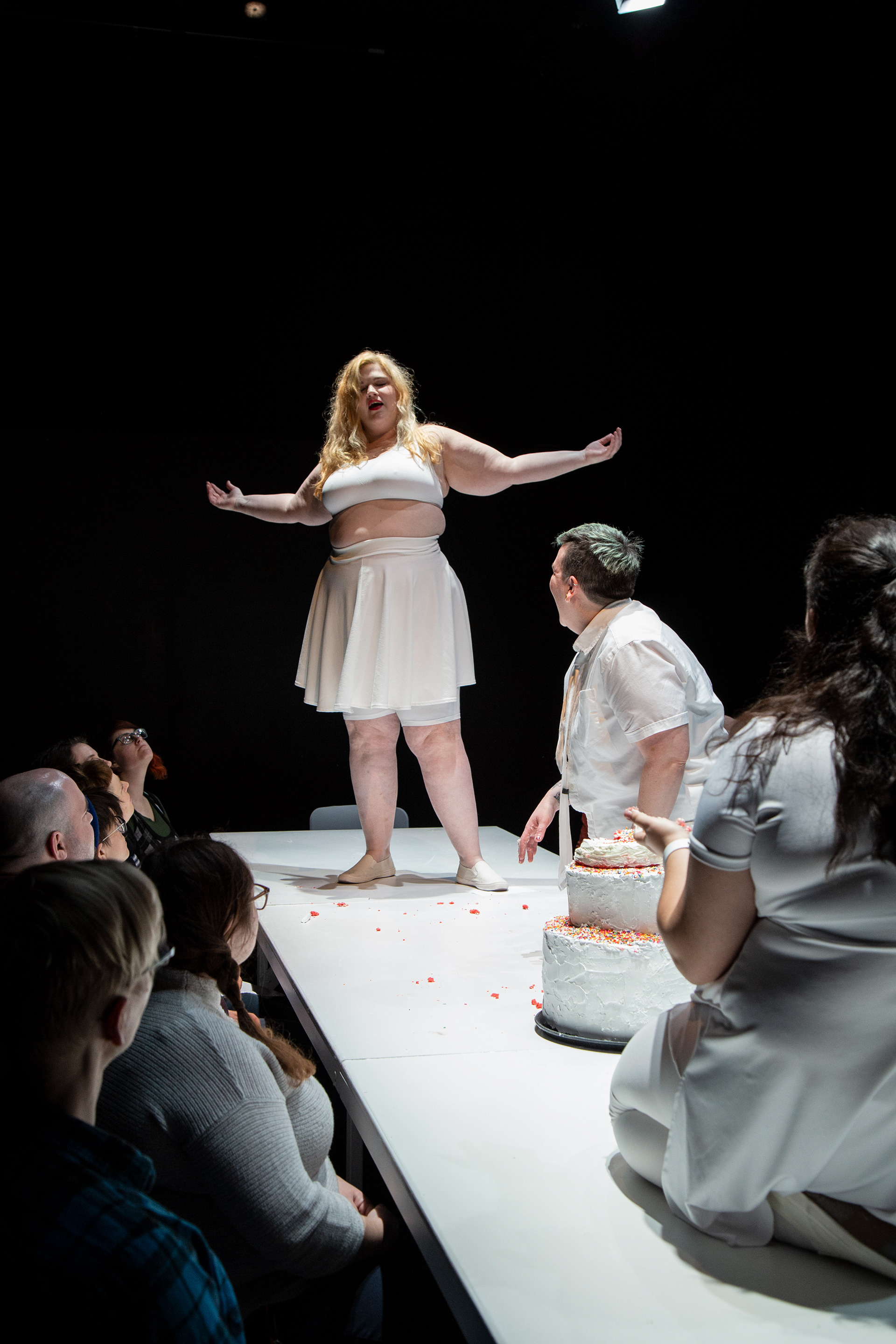 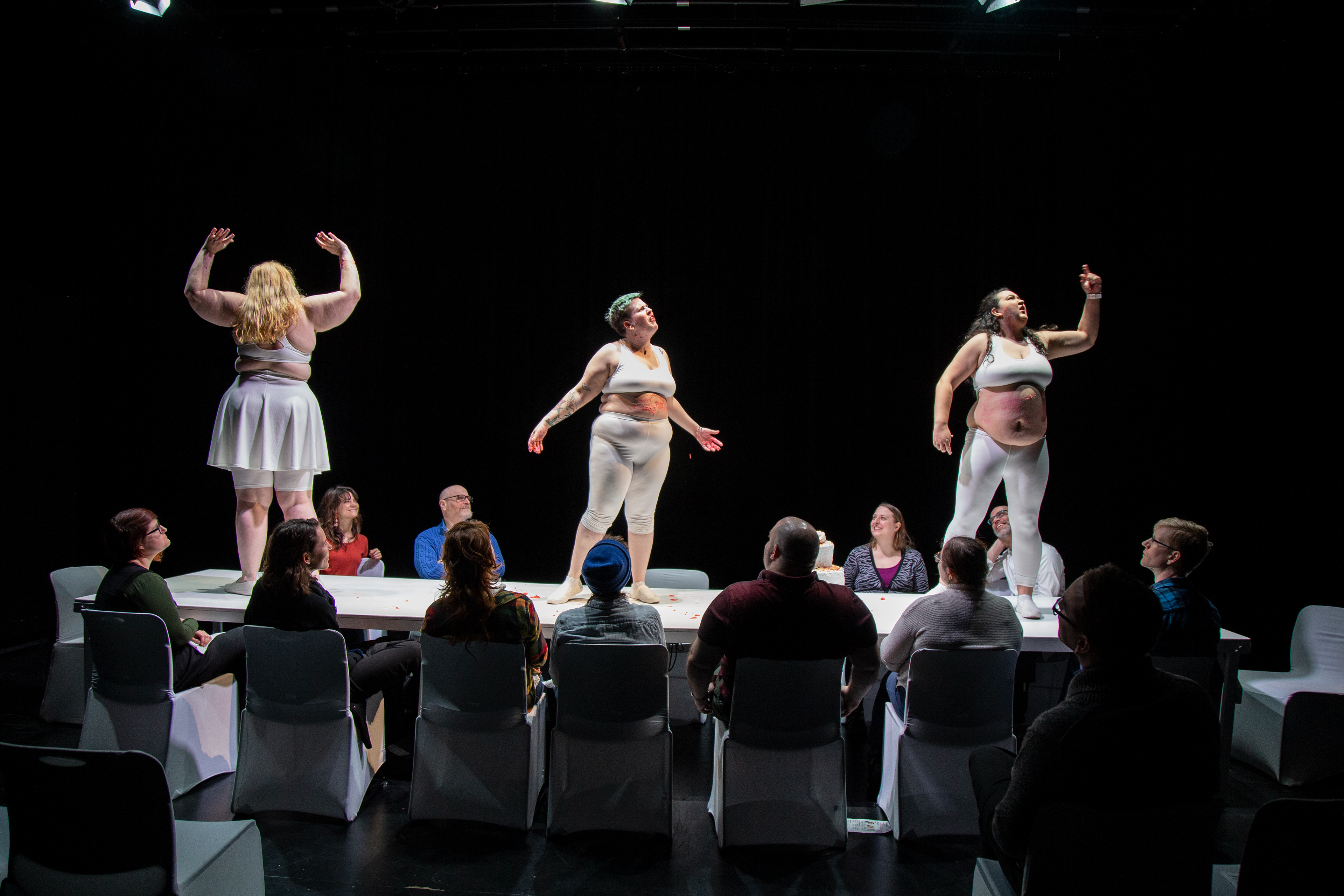 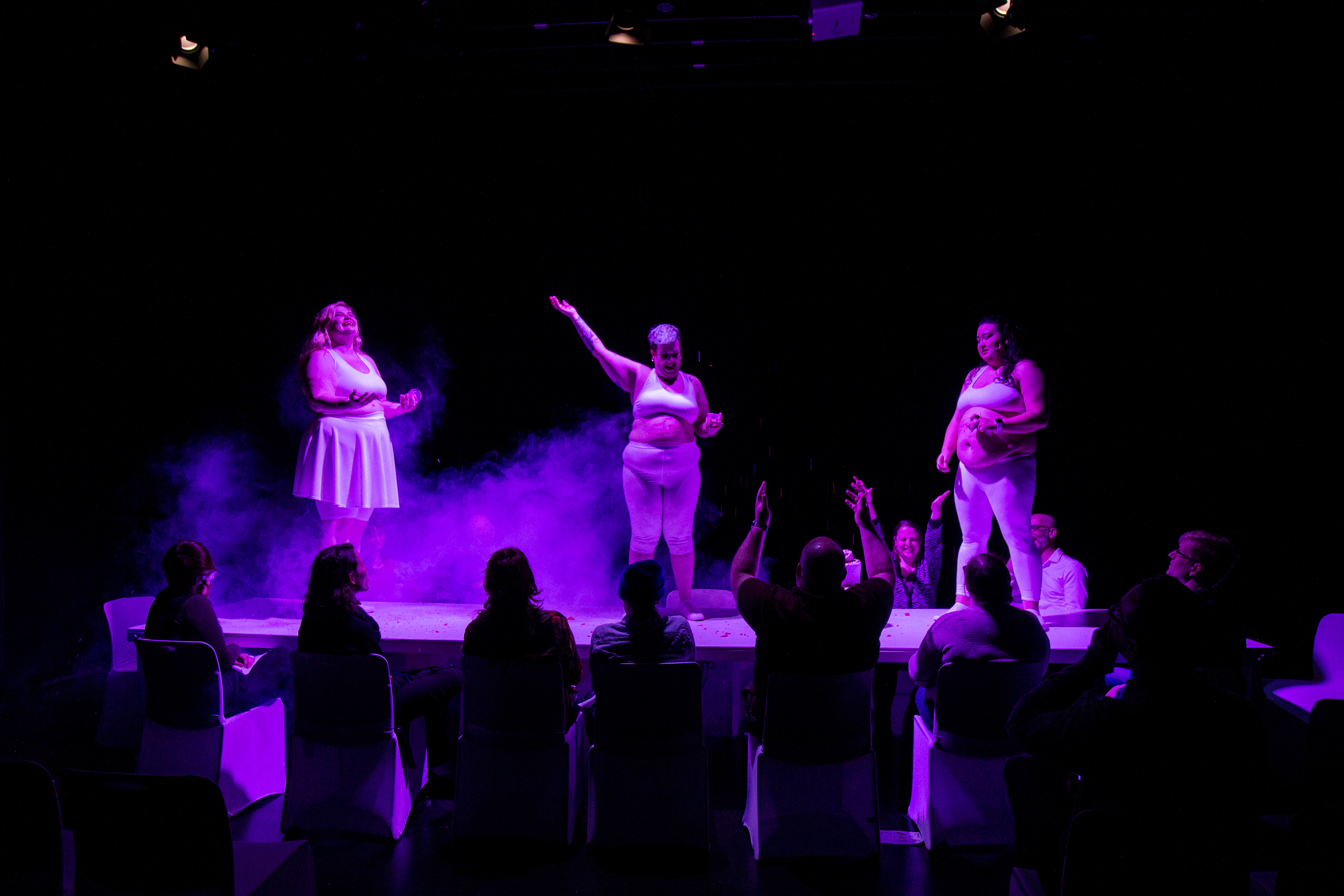 i will eat you alive
Written and directed by Katie Hileman
Featuring Becca Glantz, Betse Lyons, Meghan Taylor
You are cordially invited to a dinner party to celebrate one fat woman’s decision to lose weight. Join us for a delicious, five course meal examining diet culture, representation, and what it’s really like to be a fat woman+ in today’s society. There’s singing. There’s dancing. There’s even cake. Because we all deserve dessert! (In moderation of course!) Remember: nothing tastes as good as skinny feels, right? ....right?
"i will eat you alive" was inspired by and written after a series of interviews conducted between fat playwright, Katie Hileman, and a community of self-identified fat women+.
We are fat. We are here. And we will eat you alive.
February 27-29, 2020 at Towson University Center for the Arts (presented in association with the Towson University MFA Program in Theatre Arts)
Follow the project development at www.instagram.com/iweyaproject
Photos above by Katie Simmons-Barth. Promotional photos by Studio5 Baltimore.

A Note From The Playwright/Director
Right now I am the heaviest I’ve ever been.
This is a truth that normally comes with a side of massive failure and shame… but, SHOCKINGLY, I’m the happiest and healthiest I’ve ever been.
I’ve been in eating disorder recovery now for almost a year (it’s sort of amazing that the premiere of this play happens to fall on National Eating Disorders Awareness Week) and I have finally learned that my stories are important for the world to hear. I have learned that I don’t need to be on a diet to be considered worthy, and I finally feel comfortable taking up space in the world… a huge privilege, and with that privilege I feel the need to share and uplift other fat people like myself. Because fat people deserve to be uplifted. Their experiences are valid, beautiful, and heartbreaking, and I believe that folks with all bodies can benefit from looking at ourselves through a fat positive lens.
This play started as my desire to simply connect with other fat women+. Last summer, I formed a small discussion group centering around fat issues. Several brave fat women and gender non-conforming people volunteered to join this group, and I listened to them. We commiserated, we laughed, we cried, we learned from each other. The strength of these fat people gave me the strength to write this play. This play is inspired by and for those people, and also for the fat people still trying to put language to their experiences.
This play is also inspired by the fat positive community on Instagram. My discovery of this community and movement begun by fat WoC online has transformed my perception of myself and others. These women+ deserve credit and attention for the incredibly hard work they’re doing for fat activism: @thefatsextherapist, @ashleighchubbybunny, @bodyposipanda, and @yrfatfriend and so many more.
The truth is I’m terrified to share this play with you. This is my first full length play that I’ve written, and it’s intensely personal, and grappling with ideas surrounding body image that are still largely considered controversial and extremely complicated.
However, I do believe this play needs to exist, and I do believe these conversations need to be had. I always knew that this play would exist in some form, but I never thought I’d be the one to write it. I am a fat person, yes, and I am passionate about fat people’s rights and representation, but I am still very new on my path to body acceptance, and it’s hard. However, it is my hope that someone will see this play and feel seen. In the ways I longed to be seen growing up.

And if you don’t feel seen and are pissed off about it (as I was), I hope that you too will write a play about your own experiences. I can’t wait to see it.